From the footlights : It is said that anger stems from fear and fear ultimately leads to hate. If that is the case, then the three principal women prison inmates of Oz playwright Patricia Cornelius’s play SHIT are soul-deep in fear. Because they hate. And hate big. But not only.

With few if any of the occasional soft sidebars offered up by the t.v. magnet-show Orange Is the New Black, Firehall’s pre-show publicity puts what SHIT is about so bluntly I couldn’t improve on it if I tried :
“What about women with foul mouths and weathered faces? What about women who spit, fight, swear, hurt and steal? What do they have to say?…Watch in uncomfortable awe as angry, unrelenting, terrifying, damaged women discuss fist fights, foster care, babies, their moms, crying, and what it’s like to believe in absolutely nothing.” 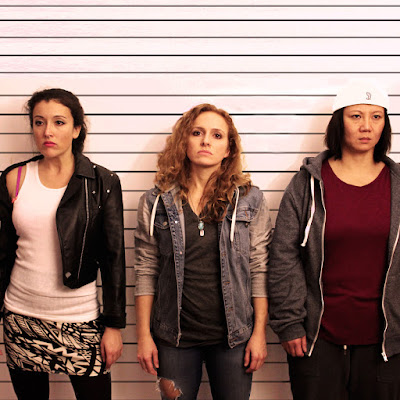 Samantha (Yoshié Bancroft), Billie (Kayla Deorksen) and Bobbie (Sharon Crandall) are tough uncompromising foster care & group home grads who’ve landed in prison together after committing a vicious assault. As the play title suggests, they give not much of a shit for anyone or anything, except each other perhaps.

How it’s all put together : Meet 20-somethings Billie, Bobbie and Sam. Not only are they from the gender repressive patriarchy that for centuries has wanted to “keep women in their place”. They are also victims of their own parents’ neglect, serial foster care placements and group homes. They have suffered a general banishment into a seething under-underclass realm where personal survival drives them deeper into desperation and despair.

Together they are in prison now after swarming a girl passing by who  “was in the wrong place at the wrong time”, they claim. The parallels with the Reena Virk tragedy in B.C. are immense. In lock-up the women swap their personal verbal “herstories” as victims while kicking about Oz’s foster care system. Like pack dogs that circle and taunt their challengers, they do so in endless attack mode via a stream of abuse, vulgarity, violent outburts and sexual innuendo that screech both in the ear and the heart.
It is not, however, naturalism. It is reality-based but unreal. Imagined. Dramatized. Poeticized. Choral. Choreographed. Starting with Scene 1 that in just 8-10 minutes produced (I attempted to count them) some 79 repetitious shouts of the word “Fuck!” — usually as a verb but also as noun, adjective, adverb and the plain ordinary hoarse and hoary expletive which is how most of us use it.
What the show brings to the stage :  Director Donna Spencer quotes playwright Cornelius : “I never want to write a moment in a play where a woman succumbs to coquettishness or is sexualized in any way, or has to be grateful or apologetic, or is there to serve some male protagonist. For women, being grateful all the time is exhausting.”

No question the sexploitation they’ve suffered is huge. Samantha at 15 was hustling truckers just for kicks but now pines to have a baby : “If you have a baby, you just haveto love them!” she says to taunts from her buddies. For her part Bobbie hates her body and all its “bits”, none of which are “me”, she says. She imagines herself a man in woman’s flesh until her pals disrobe her, lit.-&-fig.

Each of these bitter scared souls cries out to be saved. They conjure an imagined totem — Caitlin they call her — a mother-figure who might, as Billie says, “pick me up and carry me off somewhere, someone who gives a shit, someone who says ‘You mean something to me…’.” Still, she says, she can’t cry. “I don’t feel pain,” she protests in a lie about as big as her phantasy St. Caitlin.

Production values that shine : To appreciate SHIT, I think, viewers have to suppress all urges to literal-ness with this script. Its cadences are what drive it. It must be heard, like a poetry jam or rap or choral duets and choruses sans music. One Oz reviewer pointed to 19th century romantic American poet Walt Whitman’s magnum opus called Song of Myself. Nudged in the direction of Stanza 52, I consulted it.

That reviewer didn’t mention it, but I found Verse 2 compelling. It seems to sum up Cornelius’s script and her characters perfectly: “I too am not a bit tamed — I too am untranslatable / I sound my barbaric yawp over the roofs of the world.” Billie the most of the three propels her “barbaric yawp” irrepressibly, relentlessly, even when she does push-ups on the jail floor or kisses Samantha and tells her she loves her.

Set designer Conor Moore has produced a series of three side-by-side jailhouse cages that work effectively especially with lighting designer Kyla Gardiner’s consequential shadow spots and overlights. This jail ain’t no SPCA shelter : the cats flurry about hissing relentlessly at the echoing footfalls of the guards, at each other, at what life has dished out for them.

Acting pin-spots : These three as blocked and choreographed and vocally directed by Donna Spencer are utterly in sync with Patricia Cornelius’s script. They are a chorus of solo spirit dancers looking, each one, for that evasive and elusive talisman of hope that will liberate them from their core misery and anger.

Of the three the bitterest and hardest and crudest and toughest was without doubt the character Billie. Kayla Deorksen’s portrayal was completely captivating and compelling. But hard to repress a tear at Yoshie Bancroft’s wanting, wanting, wanting — a duvet, a comfy bedroom, a baby. And Sharon Crandall’s abject pain at her gender, her body, her personal entrapment was wholly engaging.

Who gonna like : All readers by now should probably know, intuitively, if they are one “who gonna like” this intense, in-your-face, profane, challenging, irreverent shout-out of pain & suffering & abuse.

Exiting Firehall we encountered a DTES resident shouting wildly at various demons and threats. The shouting was a man’s but could easily have been one of any gender who’s suffered life’s deprivation and loss and want in our otherwise comfy and smug 1st world. When Billie heard herself referred to as one of life’s Forsaken! by social workers, her reply was simple and straightforward : Fuck them!

If any or all of this strikes an Amen! chord with you, you will go see SHIT and learn some shit, no question. Dramatically. Poetically. Viscerally. I would go again in a heartbeat.

Link to the review:
http://brokenlegreviews.blogspot.ca/2018/01/shit-dtes-grit-large-ugly-poetic-all.html